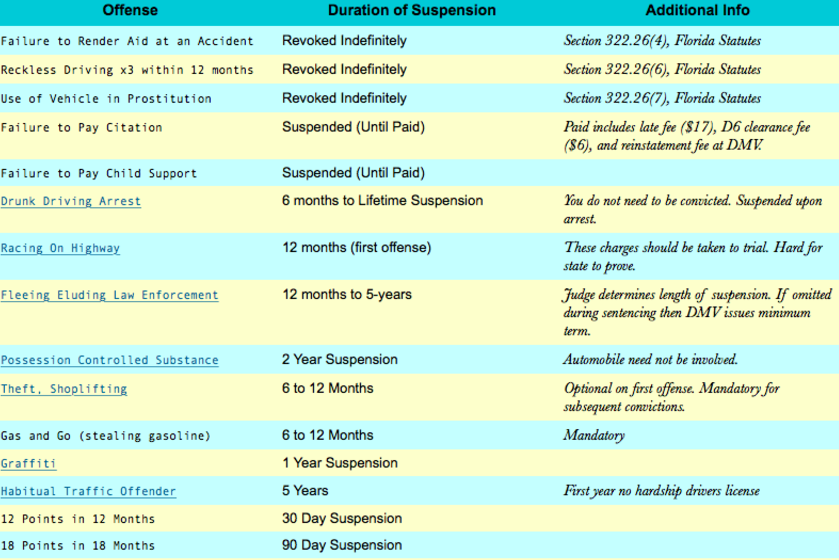 Criminal Charges that Result in a Driver's License Suspension

Thank you for contacting us! If needed, you will hear back within 48-72 hours.

for a Free Consultation

​In Florida, it is a

punishable by 60 days jail and a $500 fine to leave the scene of an accident with property damage.

If you leave the scene of a crash that involves and injury, you could be charged with a third degree felony, punishable by 5 years prison and/or a $5000 fine. Read More

Leaving the Scene of an Accident

Possession of a Firearm by a convicted

ready to talk and to help resolve you

violations affecting you and your loved

ones. We understand how disruptive and traumatizing a Violation of Probation can be to your family. A violation of probation is different that allegations of a crime, because:

I am a former state prosecutor who has

extensive experience on both sides of the

courtroom. I will fight to protect your legal rights and resolve the criminal matter in the most favorable manner possible given your specific situation. This will vary for each client and may include:​

Can you Seal or Expunge my Criminal

Record? In order to Seal or Expunge

and prosecutes sex offenses, including conducting undercover decoy stings for Traveling to Meet a Minor and Peer to Peer network stings for child pornography.

To prove the crime of (crime charged)

the State must prove the following

In addition to the standard possible punishments, if you possess a certain about of drugs, you may be charged with trafficking and subject to Minimum Mandatory Sentencing. The threshold for trafficking is as follows: Cannabis: 25 pounds or 300 plants, Cocaine: 28 grams, GHB: 1 kilogram, Hydrocodone: 4 grams, LSD: 1 gram, MDMA (Ecstasy): 10 grams, Oxycodone: 4 grams

Driving under the influence of

alcohol or drugs is a serious criminal offense.  You will need an experienced DUI lawyer to fight for you.  A conviction for a DUI can lead to incarceration and your license will be suspended.  There are substantial consequences to you and your family.

right to self-defense. Florida's self-defense statutes states:"Use of force in defense of person.—A person is

justified in using force, except deadly force, against another when and to the extent that the person reasonably believes that such conduct is necessary to defend himself or herself or another against the other’s imminent use of unlawful force." In Florida, a person can even use deadly force and does not have a duty to retreat if: (1) He or she reasonably believes that such force is necessary to prevent imminent death or great bodily harm to himself or herself or another or to prevent the imminent commission of a forcible felony; or ​(2) Under those circumstances permitted pursuant to s. 776.013.